It’s that time of year when Hallmark Christmas movies (and their imitators on Lifetime, Netflix, et. al.) are streaming 24/7.  In these Christmas-cookie-cutter cinematic confections, you are apt to encounter many of the items on the following list. (N.B. you can use the list for a drinking game—at your peril.)

Part of the current right-wing sneering about the student loan relief program that the President is setting up has to do with hard-working tax-payers being forced to finance “worthless” things like philosophy degrees. As one who worked toward two such “worthless degrees”, I am a living example of how short-sighted that view is.

My undergraduate degree was in motion-picture and television studies, which might indeed sound to the faux-utilitarians on the right as nothing more than the pop-culture version of an art history degree (a degree often ridiculed as among the most worthless).

My graduate work was in English literature, another degree often excoriated as an effete indulgence by those who think a college degree should prepare you for a real job, dammit.

Except that my college work in two worthless fields did just that. As part of my literary studies I took a course in computerized textual analysis. That led me to a good paying job programming software for the Jet Propulsion Laboratory’s Deep Space Network. Where, by the way, my literary studies also came in handy for helping me craft solidly written and persuasive memos and reports—I became my team’s go-to guy for responding to problematic directives from the higher-ups.

And my film degree? That helped me in my next job, developing instructional videos and software for university composition courses at UCLA.

All my worthless academic work, film and literary studies, came in handy for my next job, when I went to work at the Voyager Company, developing interactive media and helping to create the first widely distributed ebooks, the Voyager Expanded Books.

In short, my worthless film degree and graduate literary studies resulted in well-paying jobs and allowed me to contribute to new economic enterprises: instructional technology and interactive media. I hear there’s lots of money to be made in both those fields.

I managed to pay off my student loans myself, but even if the government had paid them all off for me it would have gotten much more than its money’s worth from its investment in my “worthless” degrees.

So stop the sneering: you never know where even the most useless or obscure college studies might lead.

Sometimes I’ll take time to compose a sentence,
Perhaps pinning words to a swift fleeing thought,
Or maybe because an id-freighted post
Twitted or TikTokked its way to my screen,
And, though but a sentence, it compels me to spend
Long minutes drafting, revising and crafting,
Balancing rhythms and linking up rhymes,
Until, were it laid out in separate lines,
It could be a poem, although it is not:
Just a small contribution to the long conversation
Between myself and the world, or myself and myself,
Uttered half-heard, or, more likely, ignored,
Bearing its dignity into oblivion.

Re-beam Me Up an Episode Concept, Scotty

I think the Star Trek writers’ room has been preserved in the transporter’s pattern buffer and is being rematerialized for each new Star Trek series set on the Enterprise.

Posted in Entertainment | Tagged television | Comments Off on Re-beam Me Up an Episode Concept, Scotty

Did this ever happen to you?

I chased my love away
And made sure she would go
Because I feared the pain of when
She’d go all on her own.

Posted in Poetry | Tagged verse | Comments Off on Did this ever happen to you?

Sumer is icumen in
Rather like Elijah,
That is to say,
Leave the door open,
And set a place,
But don’t get
Your hopes up.

Posted in Humor, Poetry | Tagged verse | Comments Off on Sumer is…

Love may, as though by lightning hit,
Flare bright and shine out briefly,
Or cast its glow, cool and slow,
As by the north lights lit.
But fast or slow,
It still will go
Out
And let the dark back in.

Posted in Poetry | Tagged verse | Comments Off on Anagapesis

We climb from the solstice
Into clean cold light,
Shedding tarnished tinsel ashes,
Wearing hueless haze,
Awaiting the staining colors
Of the next march of days.

It’s the most wonderful time of the year, featuring the omnipresent background soundtrack of holiday carols that, from sheer repetition, leads me willy-nilly to generate parodic mockeries.

🎵“Good King Wenceslas got high
On coke and pot and acid,
Then he awoke on Christmas morn
Absolutely blasted.
He tried to smoke the Christmas tree,
But he couldn’t light it.
Tried to kick the habit but
He just couldn’t fi-ight it!!”🎶

🎵“I polished off a 6-pack of beer,
The chips, dips, and a cheese tray.
And now I’m sprawled face down on the couch,
So I can’t see the walls sway.
My bladder’s full but I can’t get up,
The bathroom seems miles away.
Good will to all who have self-restraint,
But that sure ain’t me today!”🎶

🎵“O! come to our meeting
When we’ll exchange our stories
Of binges and benders
That we can’t quite recall.
Sadly, our families
Remember every detail
Of their humiliation
At our self-degradation
And vows of reparation
That we broke one and all!”🎶

Posted in Humor, Parody, Poetry | Comments Off on Carols of Bad Behavior

Alternative Captions and the Holidays

Many years ago, when I first visited my future in-laws over the holidays, I saw that they had set up a small crèche as one of their holiday decorations. I may (or may not) have scandalized them by remarking, “It looks like they’re all saying to each other, ‘I’m not going to change Him; are you?’’’

In any case, flash forward some three decades and I thought that I might attempt a Nativity scene for my sometimes-annual, always-badly-drawn (for I know no other way to draw) holiday card. For its caption I came up with a related baby Jesus poopoo joke, “Gold, frankincense, myrrh…but nobody brought Pampers?” After a few hours work, it was completed.

And then I thought of an edgier caption. Poopoo jokes are always comedy gold, but given our divisive times, this is the caption with which I finally went: 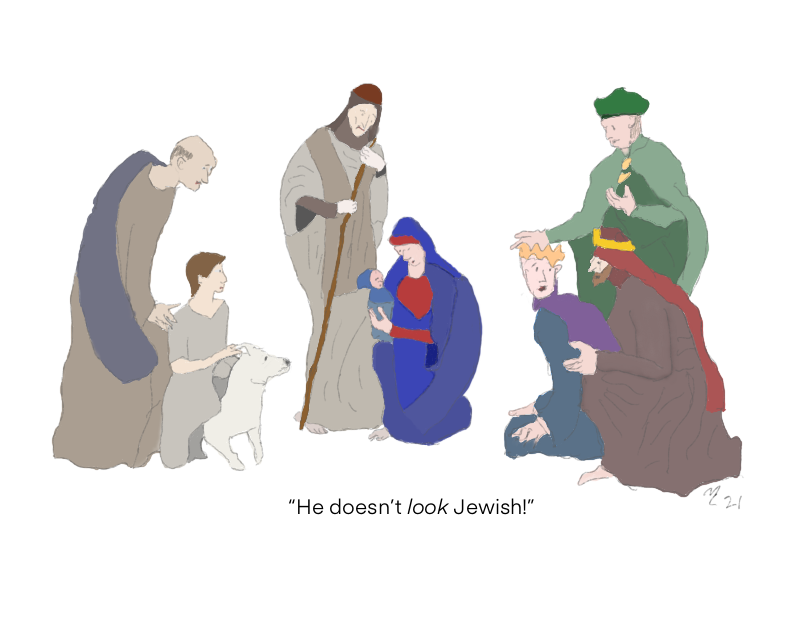 However (and it seems there’s always a “however” in comedy) my pointing out the baby Jesus’ religion made me realize that at the Nativity He was just a few short days from His bris, and that led me to this:

And, if you think that is a far-fetched reason for one of the Three Kings to “traverse afar” to attend the Nativity, you ain’t never heard of the Holy Prepuce!