A Glimpse of Rivendell on My Wrist

I recently replaced my original model Apple Watch (sometimes referred to as a “Series 0” model) with a Series 4. I really liked my old watch, but Apple stopped issuing system updates for that model so I knew its days on my wrist were numbered. When I finished a couple of particularly big projects recently, I decided that my reward would be a new Apple Watch.

The new Series 4 is a worthy replacement. Everything (except, of course, the time) runs much faster on it. It has a much better speaker. It does ECGs. It has great battery life. It can spit water!

But my favorite feature is its slightly larger display, and its ability to run the Kaleidoscope watch face full-screen on it.

On my old watch I had created a Kaleidoscope watch face based on a photo I had taken of some jacaranda tree blossoms. The result was a watch face I nicknamed “Rivendell.”

Rivendell looked lovely on my old watch, and it continues to look lovely on my new one. But when I made a full-screen version of it for my new Apple Watch, it became mesmerizing. In fact, it’s so mesmerizing that I consume much of my new Apple Watch’s extra battery power by keeping my portal into Rivendell running on my wrist for minutes at a time while I gaze at it. It’s very calming—much more so than the Breathe app. 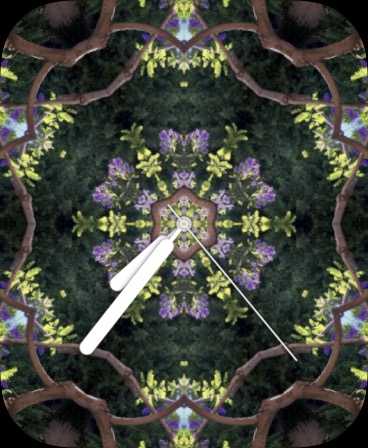 Now, I don’t know for a fact that jacarandas grew in Rivendell, but Elrond, who ran the place, knew Gandalf, and he knew the Valar queen Yavanna Kementári (the Giver of Fruits)  back in the old country, and she is the one who basically planted all the original foliage on Middle-Earth, so if Elrond had wanted one of those purple-blossomed lovelies in his valley estate, he could probably pull a few strings.…

This entry was posted in Humor, Photos, Technology and tagged Apple Watch, Photo. Bookmark the permalink.