Last week Apple introduced iOS 8 and, along with it, a reconfiguring of iCloud document storage. Moving from the old, sandboxed system in which apps had access only to their own documents stored in iCloud, iOS 8 brought iCloud Drive, which allows apps to open documents in iCloud from other apps. This has been a long time coming, but there is a hitch in the transition. It’s this: when you activate iCloud Drive, all of your iCloud documents are moved into the new storage system.

That means, sadly, that apps using the old Documents in the Cloud method of accessing iCloud documents won’t see any of the iCloud Drive files. This includes all apps on Macs that aren’t running a version of OS X that supports iCloud Drive. Such as Mavericks (OS X 10.9)—the most current Mac OS that Apple has released. iCloud Drive capability is coming with OS X 10.10 (“Yosemite”) sometime next month.

Fortunately, Apple has made iCloud Drive optional in iOS 8, though the iOS 8 Setup Assistant really tries to convince you otherwise: if you decline to make the transition, the Assistant makes you confirm your Luddite ways. 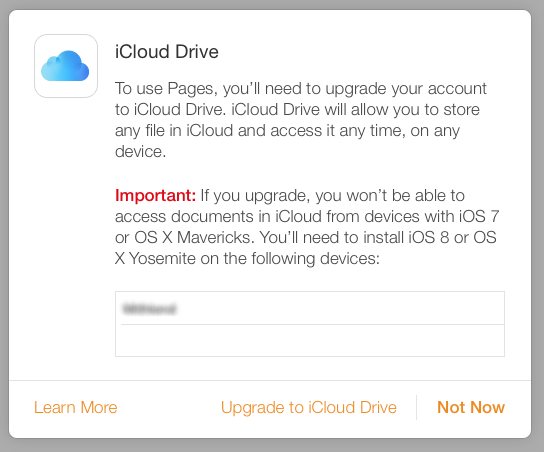 If you click “Upgrade to iCloud Drive” the consequences can be severe: if you are not running the Yosemite beta on your Mac, and if any of your Apple devices are not updated to iOS 8, they all lose access to your iWork documents stored in iCloud.

Here’s a chart that shows what works with what:

The current matrix of iCloud document accessibility — not even Neo could understand this!

Right now, Apple’s vaunted “Everything you love, everywhere you go” claim comes with a great big asterisk and a footnote that reads, “Eventually. But not today.”

[Note: Kirk McElhearn, the “iTunes Guy” at Macworld, points out that Windows users can access iCloud Drive with the new iCloud app that Apple released for Windows. But, since they can only run iWork within a browser on a Windows computer, they are only affected if they have iOS devices that don’t run iOS 8. I do note the irony, though, of Apple giving better service to Windows users than to Mac users!]

This entry was posted in Opinion, Technology. Bookmark the permalink.

One Response to New from : iWork Cross-Platform Incompatibility